What goes into a Sequel? (Rise of the Tomb Raider)


First off a quick reminder, I really like Tomb Raider and my time so far playing Rise of the Tomb Raider. So anything negative is in service of making games better, not putting down Tomb Raider. The first (well remake) I finished (with 81%), and it's rare for me to finish a game. Even though I rushed through the end to get on to the next one, it was an enjoyable experience!

This seems like an appropriate day to post since Rise of the Tomb Raider is coming out today for PC. It looks like we got a good port too!


Kotaku: Rise of the Tomb Raider Can Really Push Your PC
(although his PC specs are pretty crazy, unless you just built your rig)

So what goes into a sequel? Well, fans have to feel like you put in enough effort to justify a sequel, but if you mess with the formula too many fans of the original will hate the sequel. Everything here will be opinion, but I'll try to give a small list of what worked and didn't for me. First off, will be the two changes I feel the strongest about: 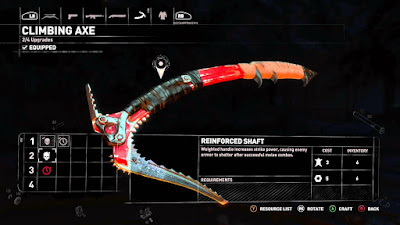 Instead of a single crafting currency there are now many. In Tomb Raider (TR), I get currency from all locations and then I have enough and the upgrade is unlocked, I just spend it. In Rise of the Tomb Raider (RotTR), I have limited inventory (that's still unrealistic so why?) and have to watch out for the exact consumables I need. I'm at a point I need a bear pelt for the upgrade I want, but they are rare. So to keep from wasting materials (if you're over the cap you can't carry them), I've been crafting upgrades I care much less about. There is always the problem of getting the materials you need.

This is an interesting one because I think my younger self with more time to game may have liked this change. I was the one playing World of Warcraft killing Onyxia and complaining that she dropped a ready-to-wear helm that fit my character without so much as an alteration... However, I'm not a fan of farming. If I kill something the size of a dozen buses, I shouldn't have to kill it a half dozen times to get enough materials to create armor for my puny human character. (I'm looking at you Monster Hunter!).

The Overuse of the Gating System: 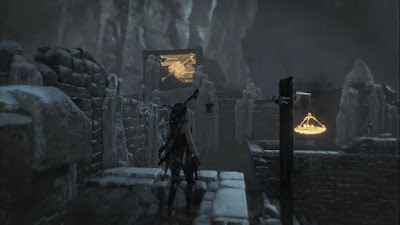 From the very start of RotTR, it's clear their level designers knew what tools they had to work with from the beginning and did a much better job. A drawback to knowing their tools is the extensive use of gating in their early levels. Recognizable rope arrow points are used extensively from the original TR before they have been made available to you. A new mechanic of lock picking is also introduced along with all the returning mechanics: pry points you need a reinforced climbing axe, explosive walls, etc... The game shows so many places you'll be returning to later once all your gear is available.

As an explorer and completionist, this drives me insane! I like to take my time and comb the area for secrets and feel good when I find them. It seems as if I'll finish RotTR by rushing through the story to the point all "progression gear" is available. Then, I'll go back through the entire game like I normally would.

Okay, now for some other changes that are noteworthy, but don't carry the strong feelings of the two above: 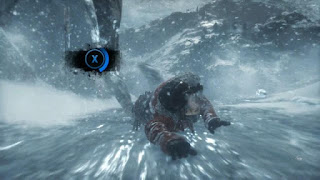 These are back, I played quite a while before I ran into them and thought they were replaced with slow-motion sequences (that use the same controls as real time), but they are there in smaller numbers. A big plus! The less QTE's the better!

These were points I struggled with in TR. When the game takes you out of cover and everyone sees you and starts shooting at you and you have to fight back. I feel both games are designed better for stealth take downs and spend the majority of my time using the bow and sneaking so mechanically, I haven't spent time with the "normal" guns. So these were difficulty spikes because the game mechanics were forced on me. So far RotTR hasn't done this, but I'm not done with the game yet.

This is a good thing about the new crafting system. Consuming a small amount of materials will allow you to craft your own arrows if you can't find any laying around as well as special arrows like poison arrows. Also, you can heal intently instead of ducking behind cover and waiting for re-gen to start. These are both welcome additions.

The Tombs and Puzzles are Much Better: 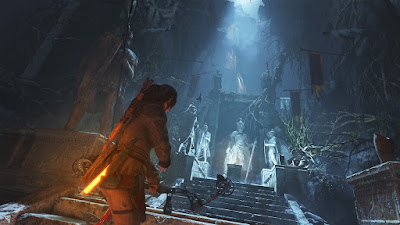 I already called out level design, but this is worth noting in it's own section. Level design in RotTR is much better than TR. I think this is almost entirely because game mechanics were mostly in place at the star of development so their team knew what they had to work with.

This one may not have been as big of a deal if I hadn't played TR and RotTR back to back. Having controls change between the two games for some of the most used features was annoying! Things like rope arrows (though they probably didn't need their own button) and whatever Laura's sense ability is (think Batman's detective mode) being remapped caused issues as I instinctively reached for the TR controls even after hours of play. I'm still playing Laura, who looks like the old Laura mostly, but controls differently.

The PC Port is Again the Definitive Version: Granted it is releasing as I'm writing this, but everything points to the work being put in for the PC version of the game including improved graphics, shaders, new nVidia tech, hair simulation, etc. At the time of release, the PC version of TR was the best, but with the next gen update the PC version was left behind mostly (it had some advantages, but overall next gen was better). This is a big deal especially with questionable ports of things like Arkham Knight and Warner Brothers (again) recent announcement they are abandoning the PC port of Mortal Kombat X. It's nice to see some companies are still doing it right! 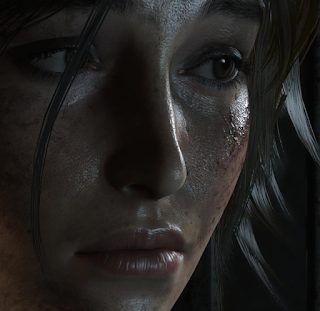 There are other differences not listed, but these are what stand out when I think about them as mentionable. I would recommend both games and they are both solid entries in your gaming library, but surprisingly I think I like Tomb Raider slightly above Rise of the Tomb Raider as I think a lot of the additions made were more about game play time padding. These days I don't have a lot of time and I don't want it wasted. If a game is beatable in 15 hours, but a solid game with a good story and progression, I'd rather play that game then the exact same game that takes 30 hours because there was 15 hours of padding thrown in. I'm not saying Rise of the Tomb Raider does this entirely, but my first two points I feel like are just for padding. Gating makes you return to areas for the completionist and while a more realistic list of crafting materials is logical, it basically ends up padding the crafting system and as a result, the progression system. I hope you enjoy both games, and I'm looking forward to the amazing looking visuals in the PC release!
Posted by Billy Chatterton at 12:04 AM No comments: