Doom Modding was my First Taste of Game Development!

Recently I was asked something to the effect of: “What was the one game that got you into game development?” At the time I couldn’t come up with an answer, but since I can never shut my brain off the next morning in the shower I came up with the answer, and figured it was worth a blog post. It brought back such great early memories of gaming.
The answer is Doom. It was the first game I modded and had great support for packaging and distributing content in WAD packs compatible with anyone who had the game. If I remember right you could do a single image or level swap to a full game overhaul and it was always contained in the single .wad file no matter how simple or complex. 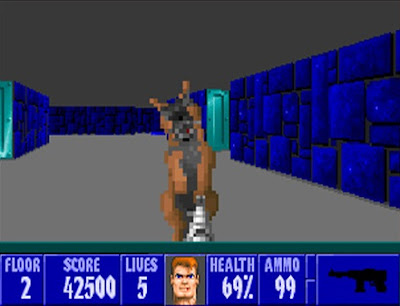 The most memorable Doom mod was taking the German Shepherd sprites from Wolfenstein 3D and replacing the pink demon in Doom with the dog. I packaged the enemy swap with a half dozen or so levels that started with normal run and gun levels, had a puzzle level that teleported you into a room full of enemies if you failed, and was at a difficulty that still challenged me after hours of play. By the time I completed the levels I could clear them fairly regularly, but everyone else I watched try them struggled with the difficulty. It was great watching other people enjoy something I’d created even if it was on par with some of the overly difficult Mario Maker levels. 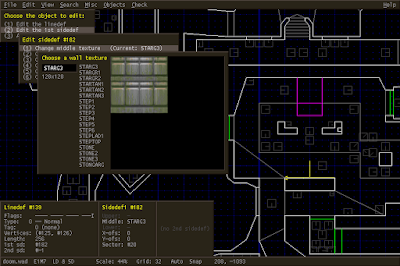 The main thing I remember about the level editor was the limitation of only being able to have one play space in the up (z?) axis. I wanted to create an underpass type of situation, but level editor couldn’t ever create it correctly in game. I think it was actually an engine limitation, but even way back then working around limitations was an interesting problem to solve. Doom was a game that pushed PC Gaming forward and the great mod support was my first early taste of game development, I was hooked! 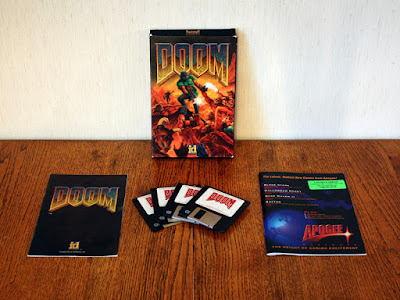 After writing this I'm going to look through my drawer/boxes for the last few remaining floppy disks I have and see if I can find one labeled "Doom WAD." I keep a Windows XP laptop solely because it's the last hardware I have capable of reading 3.5 floppies. If I can find those levels I'd like to play them again!

Posted by Billy Chatterton at 12:14 AM No comments: 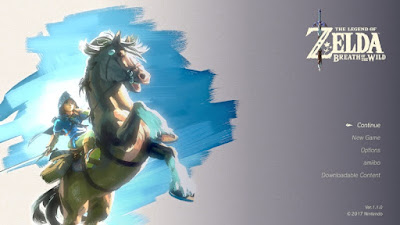 Zelda: Breath of the Wild is a truly amazing game! I don't feel like it does anything new, but everything it does is done so well!

Disclaimer: Following is a spoiler for one possible way to get to a specific tower. If you've already activated the tower pictured below, that's all I'm really going to specifically talk about in this post. 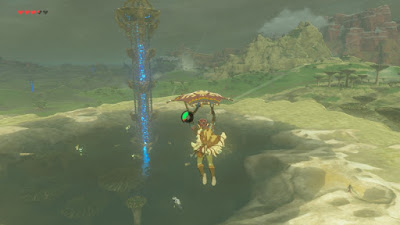 Making it to the top of this tower alive is my greatest accomplishment so far!

Breath of the Wild like almost any open world game is not about the stories in game, but rather the stores you create within the game.

Initially I cleared a corner of the lake and attempted to swim across, but I had no way to defend myself from the monsters that could float above it or attack while swimming unlike myself.

So I looked around, found a high cliff simi-nearby and went to work.

I climbed to the highest point and jumped off, but ran out of grip strength just before getting to the tower and splashed down in the water and died within seconds to the monsters mentioned above.

I found a ledge that was almost as high, but about as much closer to the tower as the distance my grip went out and tried again. This time I was inches short.

One more time from the same location but laser focused on flying directly at the tower as straight as possible and my grip failed dropping me onto the lowest platform on the tower. 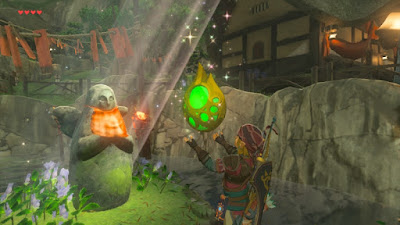 Those two points in stamina wheel paid off!

I wait about 2 seconds for my stamina to re-charge and start up the tower and get attacked form the monsters around the base of the tower and quickly die.

Repeat the above steps and save on the platform after resting :)

After a few failed attempts getting spotted on the way up the tower I figured out if I could jump three times quickly up the tower I would get out of ground aggro range with just enough grip strength left to make it to the next platform.

Repeat the quick triple jump and climb to the next platform to clear and I'm out of range of any of the monster floating/flying above the lake and able to activate the tower.

So let's talk about the game for a minute:

Nothing I listed above is new to games, or the action-RPG that Breath of the Wild basically fits into with an added puzzle component. It's just all done to a level of polish that I can't remember seeing in a single game before. Everything about that experience just worked together like you'd expect. Talking to a co-worker about the game, he told me his own personal story about a very long glide off a steam peak onto the back of his horse that was one of these "epic" moments he experienced playing.

I think the best thing about the game being a Switch release title might be that the game was probably delayed for the Switch launch, because it has the level of polish almost never attained and that would come by having more time than planned to work on the game.

Breath of the Wild's weakest point is probably it's combat, though even the combat feels like something from Dark Souls requiring defense and avoidance being prioritized above attacking. The tells for enemy attacks didn't seem to be easy enough to read and archers would often hit me from off screen and at 4 hearts there were still a fair number of one-shot-kills. This maybe because I was in an area beyond where I should have been, or maybe I'm not good enough with Link's combat system yet, but I was always able to prevail, it just took a few to many tries a few times in my opinion, but not a deal breaker at all. Good bow use and weapon choices help a lot, and many camps actually have an easy way to beat them if you look around for explosives or rocks or other things in the area.

Okay, combat is fine compared to the randomly thrown in and very poorly controllable motion control puzzles. And not to mention I'm playing with the Pro controller, so having to switch controllers is very bad UX (user experience) in the first place. 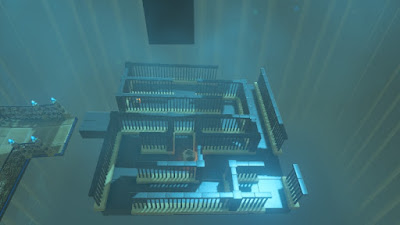 I should do a post on just Quick Time Events and Motion Controls because they are such a turn off in games, but God of War III finally got a usable QTE system. Motion Controls are held back mostly by hardware I guess, considering none of them are as responsive as they need to be for how they are used in game. 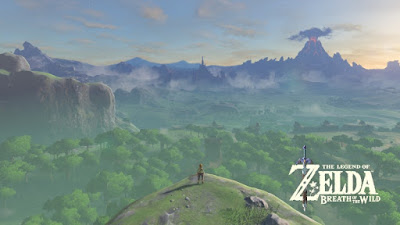 The two things that really impressed me most of all are just how far you can see, (That screenshot is in real time in game) and that you can climb and go anywhere you see.

The only thing that really constantly bugs me is having the stamina ring in the middle of your screen all the time, often over Link. (See the 2nd image of the glider above).

Over all the game is made up of so many very well polished systems that work together almost seamlessly. It's really a marvel of what can be accomplished. I've played other open world action-RPGs and nothing comes close to Zelda, it just feels right everywhere you go. Many other games get a system or two right and the rest are half-implemented/realized.

I didn't believe all the perfect review scores, but since a game can't actually be perfect, this is probably as close as you will ever get! I think it's spoiled these kinds of games for me for all time. It's the hit game and system seller Nintendo needed after a long drought! If you don't have a Wii U, go buy a switch and play this game, if you have one decide if you want a Switch, and if not get it for Wii U. It's so good!

I'm going to mount up on Traveler, ride off into the night and hope it's not a blood moon I see through the trees! 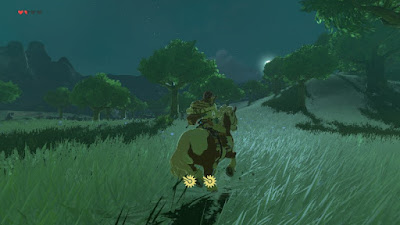 Posted by Billy Chatterton at 4:36 PM No comments: