I'm going to write about my observations of something I know little about and have read even less about. Kids and gaming. First off one thing I have learned is kids move at their own pace, and if yours is ahead or behind don't worry about it! He'll catch up, even out, or has other interests he'll pick up. My son was a super late walker and behind for about the first 18 months and we worried a bit, then he has been on track roughly since. 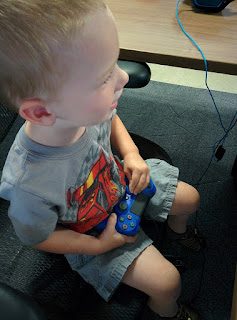 We'll start with a bit of background, I'm a game developer and my son is nearly 3 and a half years old. I've always known I wanted him to enjoy games, but wasn't sure when to get him into them. I'd mostly use them to keep him entertained when he was visiting me at work as pictured above. I'd setup Forza Horizon 3 or more recently Rocket League and let him push buttons and watch what was on screen. His brain didn't seem to be linking the on-screen action with what his hands on the controls were doing though. 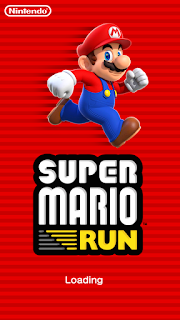 Super Mario Run came out and I was slightly amused, being in the gaming industry I try to play as many games as I can and have time for, so it was downloaded and played it a little. One day my son needed to be entertained out and about and hey Run was on my phone.

After he was hooked on the game for a while I decided to support Nintendo and dropped the $10 to unlock the game as my son had played through the starting 4-5 levels, but figured it would get to hard for him. Within a few weeks though he'd unlocked all the levels through mostly the games "easy mode" that allows unlimited time and deaths. 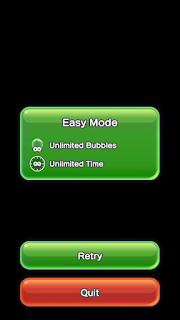 He was at the last level and there is no easy mode so he started asking for help. Since I hadn't played the game in a while I played the last level figured out the kick the bomb into Bowser mechanic and showed/explained it to him. For a couple days every chance he got to play he kept trying to finish this level on "normal" mode and failing continuously. 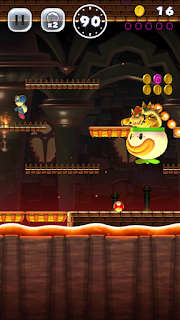 His persistence surprised me and sure enough after a week or so he'd beaten the level himself multiple times! 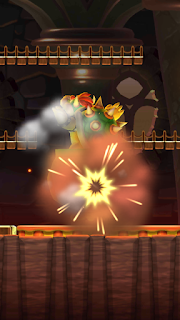 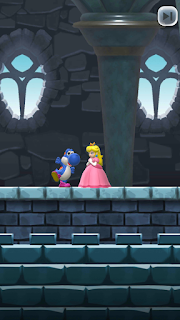 During this time he'd also developed a bit of an obsession with Yoshi as Blue Yoshi is the first unlockable character in the game and I'd found a wind-up walking Red Yoshi at a local comic book store. He's obsession was now "unlock Red Yoshi on daddy's phone!" This is no small task and appears to be the "you have no live" achievement for the game, so I started looking for alternatives. 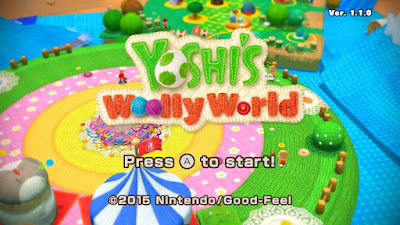 Knowing the Wii U hadn't sold well and expecting games to be hard to find now that it's discontinued I have a small library of games I'd like to play "some day" for the system. In that library is Yoshi's Woolly World. This had 2 things: Yoshi, and it was the closest most accessible game to Super Mario Brothers I could think of. Super Mario Brothers was my first real post Atari 2600 gaming experience and seemed like a good next progression for my son. 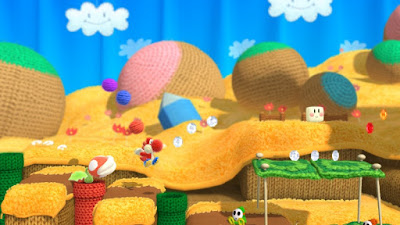 Mechanically in fact it's almost identical. The only new major mechanic is yarn throwing and a there are a few smaller things like double jumps, ground slams, etc that came to the Mario series later on.

I was going to let him watch me play as we'd done with a few other games, but he immediately wanted to play himself, so I thought that was a good sign, but quickly thought this was a mistake as he couldn't move and jump a the same time, and I got an almost constant demand for "daddy help me" this went on that entire play session and the start of the next, but he never wanted to just watch, or stop playing. A few minutes into the next session I needed to leave and left him playing without help figuring it wouldn't last long, but I came back about 15 minutes later and he was still playing on his own. Progress was still very slow involving him sitting in an underworld area eating and spitting bad guys into each other for a long time, but practicing using the mechanics. 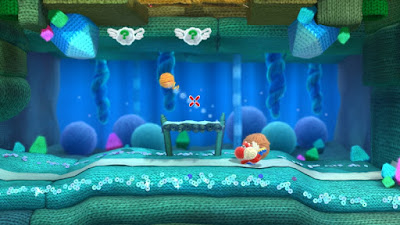 I had the entire 1-1 world memorized and it seemed he wasn't mechanically going to be able to get through it yet. He was moving and jumping though and now was having questions about how to progress... things we take for granted like down to go down pipes, up to open doors, and the level was requiring more accurate yarn throwing and assuming you would throw at an empty circle of gems to "find" the flower spawner you needed to complete the level. After a coupe days of showing him mechanics and how they are used I hear a sequel of joy quickly followed by "daddy I did it!" He'd finished the level on his own and within the next hour or less he was at the first boss having finished 4 more levels. And I watched him amazed how much better he was playing in only 3-4 days! 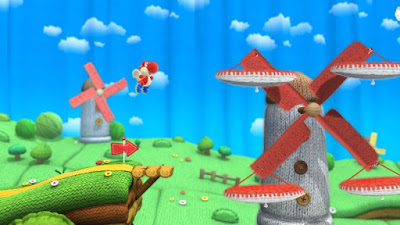 Both Yoshi's Woolly World and Super Mario Run have some really great "easy mode" features and considerations for kids/non gamers that I didn't have starting out, but I'm still shocked how quickly he was able to pickup and get good at both of them. While the transition wasn't fast enough for me to think it was going to work initially, looking back on it there was so much progress made in a short time!

I don't know what advantages this might have, but I'm excited to see his persistence even though it's hard at times! He's got some eye-hand coordination and incredible problem solving skills showing. He's having to prioritize what he wants to do with his limited "screen time" and hopefully this will all transfer to life skill. Who knows if he'll keep gaming, but it's cool to share something that is a big part of my life with him.

Next game? We have a vacation coming up, the Switch controllers are nice and kid sized, and they added some good driving assists to the Switch version of Mario Kart 8! 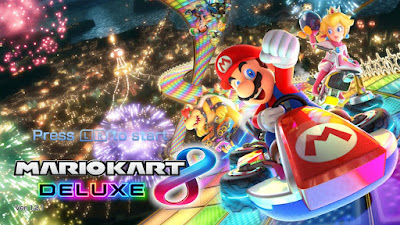 Posted by Billy Chatterton at 9:48 PM No comments: