I was pleasantly surprised with Madden NFL 18's Longshot. I rented the game to check out the use of the Frostbite engine and see the story mode I'd heard great things about. Even expecting it to be good I was still surprised with how good it actually is. I'll avoid plot spoilers so feel free to read without to much worry, if you're really interested you'll have played it by now anyway! 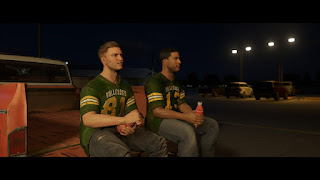 Frostbite doesn't relieve the main problem I always have with Madden games, the uncanny valley is massive! Time was obviously spent on the main characters to make their models the highest quality in the game to help. Wade and Cruise specifically got a lot of work while the other cast have a range of quality between these two and the coaches in game that look pretty bad. With the massive uncanny valley in Madden shockingly they were able to string a thin rickety rope bridge across the valley making you care about the story despite the massive valley looming below daring you to look down and break immersion with every step! 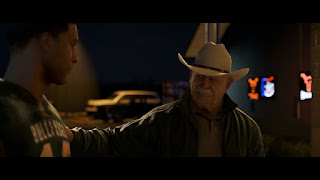 So the interesting thing to me is how they did this. One aspect was the better character models for story mode. Based on what I see in the game I think the story characters have translucency and specular masks where other models like coaches do not, and spectators don't even have lighting. 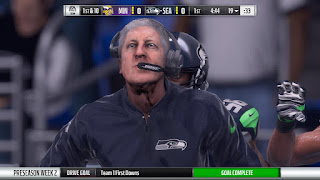 Story character's skin is done so much better than anything else in the game. Coaches and crowd are really a spot Madden's visuals break down. Also the voice acting was very good. There were only a couple of lines I can think of that didn't feel like they belonged in the situation, most of them were delivered well. The music in Madden is always very far from what seems fitting for an NFL game. Longshot takes place in a Texas town and has an appropriate country style soundtrack that fit far better than their normal game's soundtrack fits NFL football. 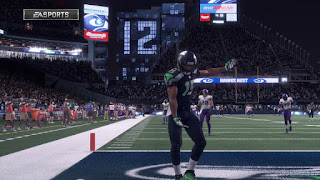 A couple of things I hope they change for next season are the quick-time-events. I'm never a fan, but these aren't normal Madden controls and don't fit in any way with the game. The ones where you move your floating ball cursor to the highlighted location and then have to quickly press whatever button prompt only shows up when you're already tracking correctly caused headaches especially the first couple times. Also as in Telltale games the conversation quick-selection is to fast. The game should take input immediately and keep going, but stop and wait for your input too if you need more time to pick, and the defaults aren't what you always want to pick. Quick-time-events can be failed easily even when you know the correct answer and what you're suppose to be doing. 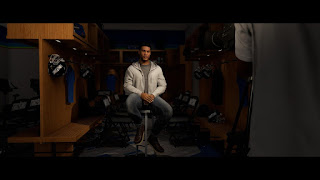 Lastly, towards the end of the game there are a string of 5 challenges that don't save between each. That's just far to much content to have to repeat if you can't get through it in one sitting. I assumed at the completion of each it would save like a normal game and had to replay almost the entire thing.

There are some pretty nice plot twists and what appears to be reuse of other Frostbite assets, but in a really cool way. I do wonder how much you can change the story by your choices such as Cruise's ending, I had to re-play a bit because of the bad save system, and it appears the story is pretty set, but you never know for sure. One character Ross is completely annoying until he has a scene with a hoverboard that just pushes him over the top and kinda made me like him after that.

It surprised me how good the story was from a game that hasn't had any in the past. I'm waiting for next year to see the next chapter of the story and see what Frostbite improvements they can make for year two! Madden is a game I normally buy one copy of per system, but the story mode might change that for me. The beginning of my play through from my Twitch stream is embedded below. Like this post it ends right before any major spoilers. And further into the game you get to use actual Madden controls and gameplay and it gets far better. Enjoy!

Posted by Billy Chatterton at 6:07 PM No comments: