The Basics of Importing Games

I have recently enjoyed importing games and am going to write a post about the basic considerations when importing hoping to help others interested in importing. There are a lot of details you'll need to look into, but this is a quick overview to get you started.

Does Your System Support Importing (Region Locking)?
The first thing you need to know is if you will be able to boot the game on your system. Some systems are region locked and will only read disks with a matching region encoded to them.  3DS is region locked while the DS was not. Playstation 3 and 4 are not locked, but I haven't looked into others so I won't list them. A Google search will answer this question quickly. If your system is region locked you'll need to buy a system for the region the game is made in. This may or may not be easy for example the 3DS is self contained, anything that is not you will need to know if it supports NTSC/PAL and if your TV also does. Also some kind of power/pug adapter may be required, plugs are easy but 110/220 voltage is not always.

PCs are technically always open, but I've read up on a few rare cases that require you to change the language and/or location in the operating system.Other issues may still apply though, keep reading.

Is the Online Play Restricted in your Area (IP Blocking by Region)?
IP addresses are the internet's way of telling who's who where the data needs to go. IP addresses are grouped by country like mailing address and some game servers restrict access to IP addresses for anything not in their intended area. I'll give two quick examples of this.

- Monster Hunter Portable 3rd: The middleware software that allows multiplayer on the Playstation 3 HD version does not connect in the US. So I can play all the single player content fine, but won't be able to use the multiplayer.

- Monster Hunter Frontier: This game is an always online game so basically you can't play any of it without connecting to a server as far as I can understand.

So how do you get around IP blocking? The only way I am aware of is using a VPN connection to an IP address inside the restricted access area. I've setup a free VPN and had a lot of latancy just web browsing, so haven't tried to play games over it at all. There are also paid VPNs that will probably perform better. Lastly I've also read about Frontier players being found out and the VPN being blacklisted so one one else could use it to play. I've avoided trying to get past this kind of restriction so far.

Is the Game Localized in Your Language?
This can be a bit one... Here are some considerations.

- If you are importing the game anyway, check all regions to see if any are better. Gundam Breaker 3 for example was never released in North America, but the Asia release had English subtitles and menu translations, so importing this version was far superior to the Japanese version.

- Look for versions that have language more similar to yours. I don't have a ton of experience with Spanish or German, but both are easier to try to decipher for me than something without the Latin alphabet.

- If other games in the series are in your language play a lot of them first. In my case most of the titles I've imported are Monster Hunter titles and I started by playing their English versions and mostly imported to play on the big screen instead of handheld. The game is still very recognizable to the original so most of the mechanics and iconography are similar enough to understand knowing them in English first.

- This one will require some gray areas, but a lot of games have fan-translated version. If you are playing on PC you might be able to patch it in, or if it's not a current generation console you might be able to find an emulated version of the game that has been patched you can use as reference to learn some of the mechanics. As long as you actually own a copy of the game and the system it seems gray, but I'm not a lawyer, so don't take my word for it.

- Look for community sites, YouTube videos, etc that other people have posted to help out. 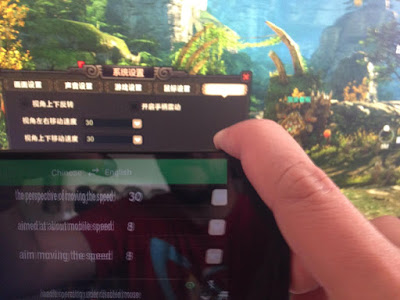 In my opinion this is the big one and what really makes importing a language you don't understand doable. Sorry for the boor quality shot, but Google Translate allows you to use your camera's phone and will in real time translate the text in the camera to your language. You can also take a picture and highlight just the text you want translated. The translations aren't perfect by any means, but normally will give you a good enough translation to figure it out.

- If you find yourself wanting to import from the same country consider learning the language.

Research the Specific Game and Region Requirements
In conclusion the internet is a big, wonderful, scary, disgusting, amazing place. Someone else has probably already imported the game you are looking out to your region if it hasn't just released. Do your research. Internet searches on every game I've imported and numerous ones that I didn't have told me exactly what to expect. They'll tell you what features will or will not work, the back of boxes will tell you what languages will have auto and subtitles and multiplayer options. Also any third party online middleware should be listed there and you can search for other games using it.

After importing a few games I was surprised how easy and enjoyable it is. And currently I'm spending a large percentage of my gaming time playing Monster Hunter Online a Chinese MMO version only in Mandarin. If there is a game you really want to try go for it and enjoy!
Posted by Billy Chatterton at 8:28 PM No comments: