2020 presented me with an unplanned and unique opportunity to complete four season passes in roughly a months time. Since this will likely not happen again, I decided I should document what I learned about the differences in the passes.

Season Passes are the current preferred monetization method in free-to-play games and some retail games are using them as well.to continue monetization and player interactions over time. The consistent features of the passes seem to be a limited amount of time to earn rewards (usually new to the game and cosmetic) with free and paid tiers of rewards you unlock during the time the pass is active. While the free items are free to earn while the pass is active, the paid items require hard currency (currency you can buy with real money) to be paid to unlock them, and will often allow you to earn back the full purchase price of the pass if you earn a high level within the time frame the pass is active.

Below I will give a quick comparison of the four passes I was able to recently complete. 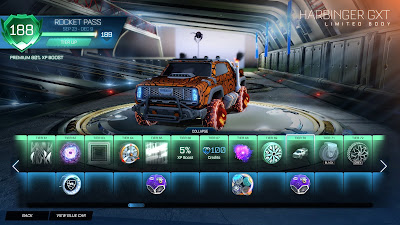 What's Unique::
The Rocket Pass is the most generous with it's free content in my opinion. Once the pass is maxed it rolled random painted (pallet swapped) rewards from the pass and with repeat protection you don't run out of unique items until somewhere in the 300 level range (if my memory is correct) depending on the pass and how many items are painted with how many colors etc.
Normal Levels:
Rocket Pass goes to level 70 with 3 variations of the "hero car" from the pass and a variety of cosmetics for the hero car and many other popular cars. The majority of items aren't tied to a specific car and can be used on any of them. Cosmetics include: decals, paints, wheels, goal expulsions, boosts, etc. 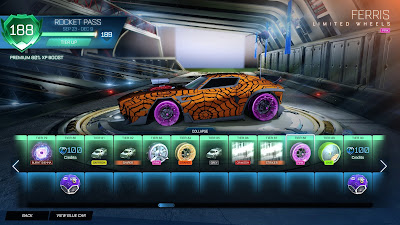 Bonus Levels:
From level 71 on painted versions of most of the later level rewards will start dropping with some more currency for paid pass levels and random items for free players. If you keep leveling to around 100 I think you'll earn your currency back for unlocking the premium tiers.
Disclaimer:
The Rocket Pass is what I have the most experience with, I implemented most of the code driving the UI and have a very thorough understanding of at least the first season pass. I've completed all of the season passes so far, so it's kind of the measuring stick for me. At the time of writing: I am also currently employed at Epic Games' Psyonix Studios. 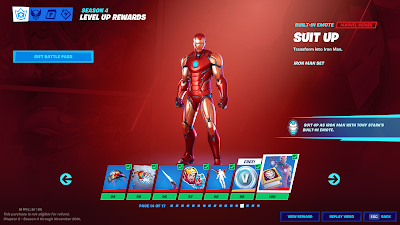 What's Unique:
If my memory is correct Fortnite and DotA 2 started the Season Pass idea and the Battle Pass hands down has the most content in any pass I've looked into. In the Marvel pass they have 8 characters, not to mention other cosmetic items like tools, backpacks, gliders etc. They also have an extensive challenge system that has random daily challenges, and curated weekly and event challenges that both help you make fast progress through the pass and unlock new content if you complete enough weekly content, including skins. The way the challenges are spaced out make the pass relevant for it's entire duration in a way I haven't seen any of the other's accomplish. A late unlock Wolverine skin that is unique requires eight and a half weeks worth of weekly challenges to be completed. Each pallet swap of the 8 main skins require the majority of a specific set of two week challenges to be completed, so even in the last two weeks when you're well past max level you're still doing weekly challenges to unlock variants. Also these weekly challenges aren't retired at the end of the week so if you're on vacation, buy the pass late, etc., they're all still there to complete. Battle Pass is a very player friendly design. My only complaint is I thought I was getting to the end a couple times and kept getting more content, but really that's just more to do!
Normal Levels:
Battle Pass goes to level 100, but there are alternate skins that are added as you do weekly challenges. The content varies per patch, but this one had 8 Marvel characters and all the accessories made for each of them. 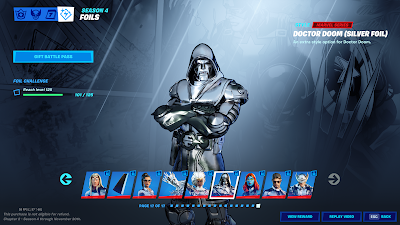 Bonus Levels:
After level 100 the Battle Pass has a silver, gold, and multi-color version of each major skin and a few other accessories as well. There was also a completely alternate Wolverine skin that unlocked after doing enough weekly challenges, not technically past 100, but hidden until late pass. There could be more I'm not aware of as the pass keeps surprising me with new content. 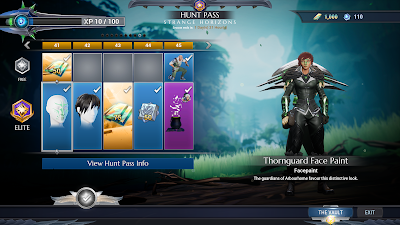 What's Unique:
The Hunt Pass does feel a little light on content, but they had a bonus period at the end that increased the amount of XP earned to help make the last push to complete the pass easier. The cool unique thing here is the store that you get currency for as you level up. You get a small amount under 50, but past 50 you get a fair amount every level. I believe it lets you buy content from previous passes you may have missed out on with currency you earn leveling the current pass.
Normal Levels:
The Hunt Pass goes to level 50 and gives you 3 full armor sets as well as armor dyes, hair styles and colors, weapon skins, and other cosmetics and emotes, etc. 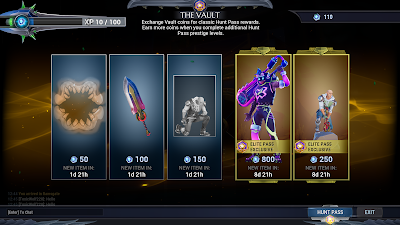 Bonus Levels:
Hunt Pass levels starting with 51 give you the special currency that you can use in the Hunt Pass store. The only down side is if you have purchased every pass do you already have all this content? Even if so they could easily add new content here too. 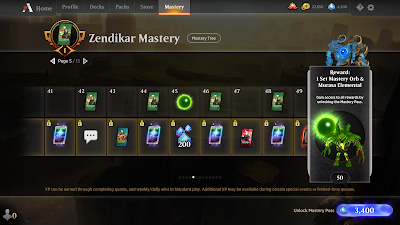 What's Unique:
The Mastery pass was the lightest content wise and most interesting from a design perspective. This is the only pass that could be argued is pay-to-win because it comes with so many card packs as rewards, and the better the decks you can build the more likely you are to win matches. It also comes with tournament "entry tickets" that are "worth" whatever the entry fee is for those tournaments, and tournament rewards also contain packs of cards. There are very few cosmetics available in the game, and after you max the normal pass they also start giving out a lot of game currency to players who paid for the pass that could compound the pay-to-win feel? As a player you're given the most valuable items available, but there also aren't many options for purely cosmetic rewards in the game so it's hard to fault the developers. It's an interesting conundrum!

Also experience to level up seems very limited. There are daily challenges, that will cache up to 2 previous days to give you a total of 3 days worth of challenges to grind at a time, daily wins, and one other bucket I can't remember. After you complete these I don't believe there is a way to progress your pass until the next day. This is probably a design limitation to control the flooding of packs and currency by people rapidly completing a pass?
Normal levels:
The big item in these passes are the cosmetic pets you get a few variants as you progress in the pass and a player avatar. There are cosmetic card variants and card backs, but that's all the cosmetics in the game. Card packs show up throughout the game and the pet maxes at level 50, so we'll call this the cap even though it's harder to define in this pass. 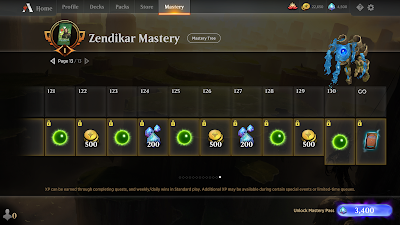 Bonus Levels:
Above level 50 it's mostly currency rewards. You can see the pass up to 130, and then it's random cards to fill out your sets. The do have duplicate protection, so overall it's a great way to build decks, and since Magic sets are retired regularly passes are limited for how long these earned cards are useful, mitigating at least the amount of time you have an advantage from buying a pass. Also all the cards are available other ways, you just get them much faster buying a pass.
Posted by Billy Chatterton at 9:54 AM No comments: